Breakthrough for environmental waste management London, UK as Gatwick Airport launches reusable coffee cups trial. Gatwick airport has launched a trial in which passengers are offered reusable cups, instead of the usual paper disposable type. These reusable cups can then be discarded off at one of the multiple specified drop off points prior to boarding their flights.
At Lawmens, we hold environmental waste management London in the highest regard and are encouraged by the strategy, which we hope will be adopted by other facilities and venues.
Around 7 million paper cups are currently used at Gatwick airport each year, with around 5.3 million of those actually being recycled. Although the recycling effort is not to do be undermined, this does mean that 24% and almost 1.7 million paper cups are not being recycled each year.
The scheme in question was set up by Starbucks and the charity Hubub, who have said that they hope to put 2000 reusable cups into circulation within Gatwick Airport’s South Terminal.
The household named coffee shop has said that they aim to save 7000 disposable cups over the course of the month long trial, in a breakthrough for environmental waste management London.

TrewinRestorick, the co-founder of the environmental charity Hubub said, “We know that people care about waste, but it’s often hard to ‘do the right thing’ when travelling – we want to find out whether people will get on board with reusing cups, if we make it easy and convenient.”

These reusable cups are returned to one of the five points throughout the terminal, before being collected by the airports environmental waste management London team. They are then washed, sterilised and returned to Starbucks for reuse.

In addition, the environmentally conscious Starbucks introduced a 5p charge on paper cups back in 2018 to encourage reuse. They are then donating all proceeds of this charge to Hubub in order to carry out environmental projects and research.

Starbucks stated that during the first day of the trial, more than 300 free reusable cups were given out to customers, saving a considerable amount of environmental waste management London. Mr. Restorick said: “What we learn here will provide valuable insight into how to deploy a reusable trial in not only other airports but many other environments.”

Although it is a small step and quite ironic in that the project has been initiated within an airport, where it could be argued that the significant environmental impact is coming from the travel method itself – it is still a very important step in the right direction for environmental waste management London.
If you would like to speak with one of our specialist project managers or get a price for your project, please email franky.law@lawmens.co.uk.
We can also offer a variety of service based presentations, included approved CPD, covering various aspects of environmental assessment.

Book An Appointment With One Of Our Project Managers

Lawmens is a family run business established in 1988. We have steadily become a recognized and respected specialist supplier of waste management and full environmental reporting, assessment & consultancy services. 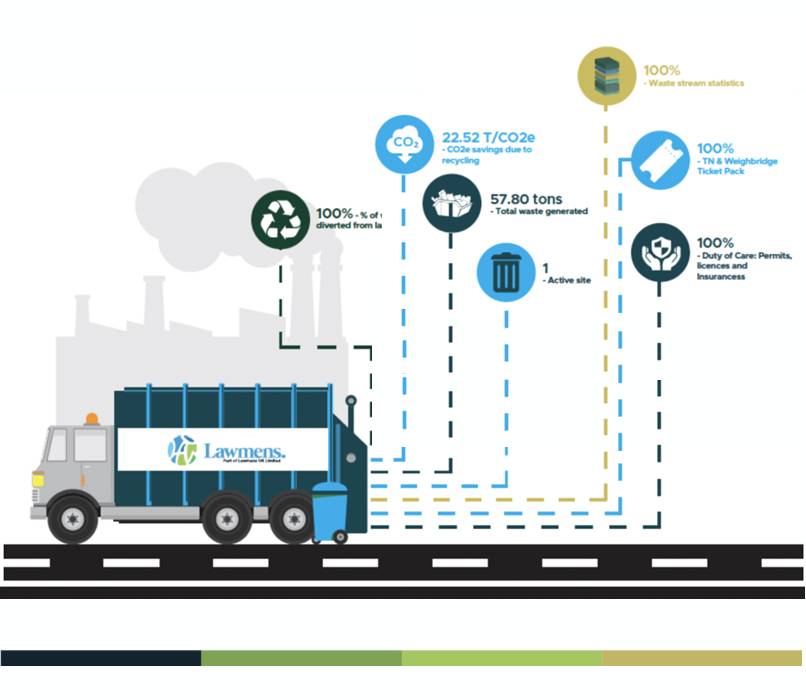 Get in touch now

Book a consultation with one of our experienced waste and environment specialists.